Widseth announces expansion and rebranding of its aerial mapping subsidiary

When you remake yourself by doubling your staff of topnotch professionals, purchasing state-of-the-art equipment including a new fixed-wing aircraft, and distinguishing yourself as a client-driven firm, the timing is perfect to roll out a new brand identity. 95West Aerial Mapping, LLC, formerly KBM GeoSpatial, LLC, has rebranded to reflect and showcase the firm’s expanded capabilities. 95West provides aerial acquisition and geospatial services throughout the United States and Canada.

Widseth formed the subsidiary KBM GeoSpatial with its acquisition of KBM Inc. in 2016. The aerial mapping team continued to expand its client reach and added key professionals in leadership, technical, and client service roles. Effective September 30, 2021, KBM Geo has rebranded as 95West Aerial Mapping, highlighting the firm’s expanded capabilities, including: 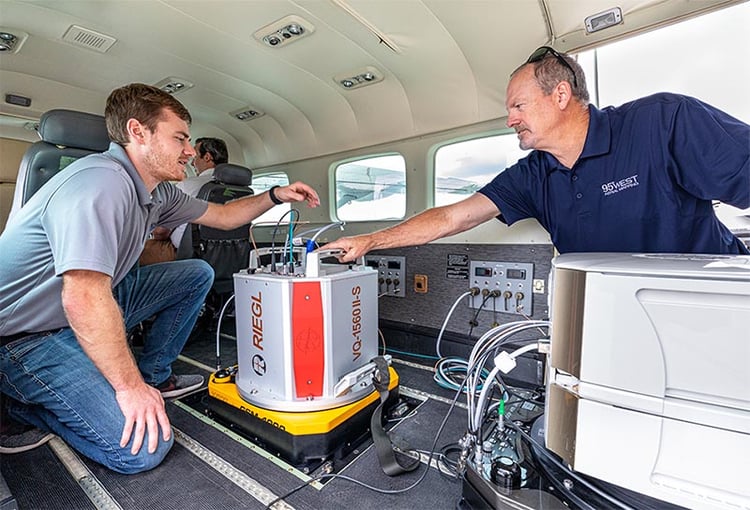 The new RIEGL VQ-1560II-S is built to better service mountainous terrain, mining applications, and other demanding topography. To get an idea of the remarkable resolution of the Vexcel UltraCam Eagle M3, first consider that most cameras owned by the general public are now 20–30 megapixels. The UltraCam is 450 megapixels, capturing crystal clear images from whatever height we’re flying. The larger and more stable platform of the Cessna 208B Grand Caravan offers more room to house and to work with the equipment. 95West now has the capacity to service larger projects of greater coverage areas with improved levels of detail and accuracy for federal, state, and local governments, utilities, and private entities.

Aerial Services Manager Miles Strain says of the rebranding, “In a nutshell, the timing was right to capture and reflect the new, exciting opportunities we have in front of us. The commitment from Widseth to invest in the new (bigger and better) plane, Lidar sensor, and imaging sensor; the growth of the department under new management; and upgrades to software and hardware gives us a renewed focus with the latest technology in the aerial industry.”

What’s in a name (and a logo)? The name 95West is a nod to the 95th meridian west, which runs through the heart of our service area. Meridians are imaginary lines drawn north–south, from pole to pole, with numbering beginning at and advancing east and west from the prime meridian. Meridians are expressed as degrees, thus the design element captured by the logo. The colors represent earth and sky, as well as active energy (orange/rust) balanced with calm stability (blue).