A Day (an Interesting Day!) In the Life of a Surveyor

Sometimes the biggest challenge of performing fieldwork has very little to do with the knowledge possessed about the discipline and everything to do with Mother Nature. While working in the field this past week, Widseth's Cody Kisthart, Land Surveyor-in-Training, Crew Chief, had a day he won’t soon forget. He was near Campton Hills, IL, about 40 miles west of Chicago, working on a land survey field project when dangerous weather erupted. See Cody’s story below.

"Today was a doozy! I left for a job in Illinois this morning at 4 AM so I could beat the traffic in the Cities. It was foggy until the Wisconsin border, then it rained the rest of the drive. Not ideal, but I made it to my destination, nonetheless. I worked all afternoon, locating property corners and battling overhead cover and poor PDOP (position dilution of precision) with my GPS. I noticed it was getting darker and I could hear distant thunder, but nothing seemed out of the ordinary. Then, a guy comes running up to me to tell me that they just issued a tornado warning and that I was more than welcome to join him and his family in their basement if things got bad. Well, long story short. Things got bad. Quick. All of a sudden it got really still, super humid, and every tornado siren was going off. I figured it was probably wise to seek shelter, so I headed to the aforementioned gentlemen’s house and knocked on the door. He invited me in and introduced me to his family. We were all hunkered downstairs and watching the coverage of the storm on the news. Every couple of minutes, it seemed like there was a new tornado warning being issued, and the sirens were going off for well over an hour. At one point there were three tornados on the ground, and one was extremely close to us.

Small talk ensued, as we watched the storms keep popping up and our phones would all go off with emergency alerts indicating a new warning had been issued. I was a complete stranger. Yet this wonderful family opened their home up to me and I even had dinner with them while we waited for the storm to pass. I am blown away at the hospitality and selflessness that I was shown. I’d like to think that if I was in their shoes, I’d have done the same thing, but inviting a complete stranger into my home, regardless of the circumstances, seems daunting now that I have a family of my own. I’ve been struggling lately to keep a positive attitude with everything that is going on in the world, but today my faith in humanity was restored. Not only did Chris and his family open their home to me to seek shelter during the storm, they said their spare bedroom was open if I needed a place to stay tonight. Not only that, but neighbors called because they saw my survey truck on the street but didn’t see me and were worried I was somewhere in the storm. Not sure what’s in the water down here in Campton Hills, Illinois, but whatever it is, the world sure could use some of it right now! I can’t thank Chris and his family enough for keeping me safe during one of the craziest storms I’ve ever witnessed. Let’s all be a little more like Chris!" 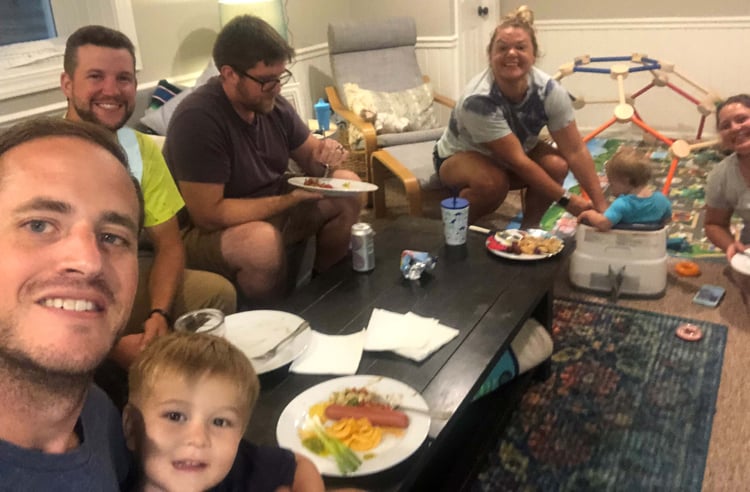 Cody (third from left) waits out the storm.

Thanks for sharing your story, Cody. We are glad you made it home safely and with a smile on your face!