When a team of Chippewa County engineers was exploring options to redesign the county highway system, they relied on Widseth’s aerial services to survey their land quickly and accurately.

Pre-flight Check and Take Off
Chippewa County’s design project required timely data collection over a wide area—a perfect situation for aerial acquisition with a strong survey team on the ground to fill in gaps that cannot be captured from the sky through the wooded and lush landscape. Widseth had completed similar work in the area for the Minnesota Department of Transportation, and Chippewa County reached out to Widseth for similar support. The aerial services team met with the county engineers to understand their exact goals and crafted a strategy to collect the correct data that would support the County’s design efforts. Prior to the acquisition flight, Widseth’s land survey crew established horizontal and vertical control targets. These points were used to accurately tie the imagery and lidar data to real-world locations.

In Flight
Widseth’s aerial team flew over the county’s highway systems, capturing imagery and lidar data, which uses laser technology to survey large areas quickly. Lidar accurately captures hard to reach areas in much less time than traditional land-based surveys. Widseth’s land survey team worked simultaneously on the ground to capture missing data points that were obscured by the tree canopy. This survey was completed in under an hour, whereas a traditional land-based survey would have taken weeks.

Soaring to New Heights
After capturing the raw data, Widseth’s aerial team brought the information back to their office and began calibrating it with the data acquired by the land survey team to classify material and create a useable terrain model, accurate within a tenth of a foot or less. With this data and design partnership, Chippewa County’s engineers incorporated the survey data into their software to complete the roadway design, laying out the center line of the road, analyzing the width of the lanes, shoulders, and the slope into the ditch line.

Extremely accurate data leads to well-designed solutions. By partnering with Widseth’s aerial services team, Chippewa County’s engineers can create reliable infrastructure that will support the well-being of their communities for years to come. 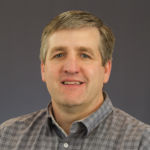